Michigan International Speedway has become a yearly – sometimes twice yearly -trip for me. I go up just for the day to see the Cup race and come home the same day. It makes for a long day as MIS is about a three hour drive from where I live and in a different time zone.


This past weekend was no different. My friend David and I left town a little after 4am central time and we arrived at the track and parked by about 8:30am eastern time.


All the exhibits and haulers were open as we made our way into the fan plaza.


Bob Pockrass hosted a tweetup at 9:30am, with appearances by Brad Keselowski, TJ Majors, former Miss Sprint Cup Monica Polumbo, and track president Roger Curtis among others. This group was the largest I had seen at MIS and rivaled some of the tweetups I’ve attended at other tracks, including the one at Charlotte two years ago at the All-Star race.

Mingling and talking with some friends who I only get to see at races, there was a chance for me to chat briefly with the host. Bob and I had a short conversation, which entailed him asking me whether or not I was sitting close enough to the track to get rubber on myself. This question has been a common one from him every time I see him. I looked at him and then at my ticket before sharing how close my seat was to the track.


After the tweetup, the next stop was over to the Farmers Insurance exhibit where Kasey Kahne was scheduled to make an appearance at 10:30am. While waiting for Kasey to arrive, the rain started to fall lightly. By the time, Kasey’s appearance was done, the rain was falling slowly but steadily. We decided to head up to the track and wait out the rain under the grandstands. The rain stopped briefly and we thought that it was over as we ventured back out to the exhibits, knowing we still had a little time to kill.


While out at the exhibits, the rain returned with a vengeance, so we again took cover as best we could under the Farmers Insurance exhibit while waiting for the rain to slow down. Once it had slowed enough, it was time to make a run for it back to the track for the shelter of the grandstands once more.


We found a spot under the stands comfortable enough to sit. So I texted a friend that was watching the race at home to find out what was being said on tv about the weather and what the radar was looking like. As we sat and waited out the rain, it reminded me of several times on a Cup race day where I have found myself taking shelter under the grandstands.

As soon as the sound of the jet dryers was heard, there was an eruption of cheers and applause from everyone under the grandstands. We headed out to the plaza one last time where many people chose to kill a little time waiting for the track to dry, hauler shopping one last time before the start of the race. After finishing up at the haulers, we headed back in and to our seats.


We stood as the invocation was given, then the Canadian and American National Anthems were sung along with fireworks and the traditional flyover before settling in to watch the race. Before the green dropped, I knew we were going to be in for a very interesting race with the repave, a green track due to the rain, and a different tire combination than what they had tested on, practiced part of the weekend on, and qualified on.


The early part of the race was just as crazy as I thought it would be. Early in the race, under one of the first cautions, when one of the safety trucks drove by, I overheard someone in my section yell out “Stay away from Montoya”.


When Josh Wise’s engine expired, he dropped oil in front of where we were sitting so not only did we end up with rubber on us during the race, but we also got some speedy dry on us as well.


People in my section were very vocal and cheering when both of the Busch brothers had their separate issues during the races.


I was very disappointed and upset when Kasey got caught up in the wreck with Joey Logano and David Gilliland. He had been working his way back to the front after falling back early in the race. He went to the garage and I didn’t know if he was going to get back out or not. His team worked hard and got the car back out to run some laps before the race was over.


When the checkers flew, my friend Jamie, who was also at the track with her husband, was elated and I was very happy for Jr. It had been 4 years since his last win and this was the track he last won at so it was very cool to see.


See Michelle’s Fan at the Track photos for this weekend.

All content is owned by Fan4Racing at Fan4Racing.blogspot.com
NOTE: No publishing or redistribution of any content is allowed
unless there is written, documented permission from Fan4Racing

One of our Fan4Racing writers was at Michigan International Speedway for the Quicken Loans 400 on June 17, 2012.


Michelle usually makes Michigan at least one stop during her NASCAR race season and she is sharing her race day story and photos here.


As you will see Kasey Kahne is Michelle’s favorite driver and Michelle is a seasoned TweetUpper.

Ready for a Race 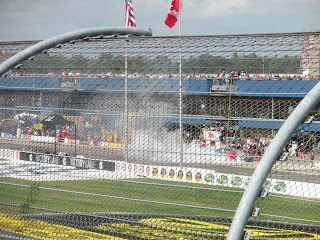 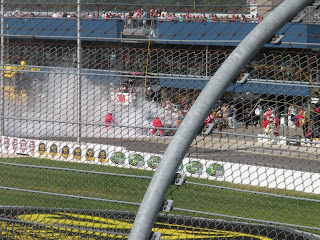 Crews still busy
with No. 11 Car 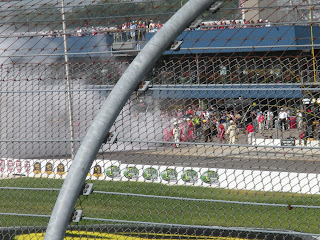 And yet still
trying to extinguish
the No. 11 Car

Dale Jr’s Dew Crew
Happy with a WIN!!!
Thanks Michelle!
All content is owned by Fan4Racing at Fan4Racing.blogspot.com
NOTE: No publishing or redistribution of any content is allowed
unless there is written, documented permission from Fan4Racing