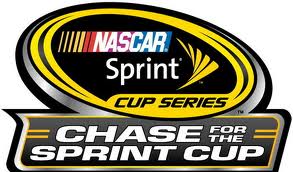 By Jordan Dodson and Sharon Burton

Martinsville Speedway is known for exciting races and shaking things up and Sunday’s Tums Fast Relief 500 lived up to expectations.

Chase drivers knew Sunday’s race could make or break their season and for some, their 2012 Chase hopes diminished. Two contenders are still clinging to their chances in the next three Chase events, while two other drivers came out on top, fighting for the Sprint Cup championship top spot, while yet another driver lost their chance to compete for the coveted title.

For drivers sixth through twelfth in points, all realistic hope of a championship have disappeared in the last couple weeks. Wrecks, miscalculations and mechanical issues have left them on the outside looking in on the championship hunt. Those drivers from twelfth though sixth include, Dale Earnhardt Jr., Kevin Harvick, Tony Stewart, Greg Biffle, Matt Kenseth, Martin Truex Jr. and Jeff Gordon. As Rusty Wallace and Brad Daugherty of ESPN might say, put a fork in them!

After Martinsville, Jeff Gordon, sixth in points, is 54 points behind the points leader. With only three races remaining in the Sprint Cup season, there is simply not enough time or opportunity for drivers – from Gordon to Earnhardt – to climb back in the Chase to make a championship run at Homestead-Miami Speedway. 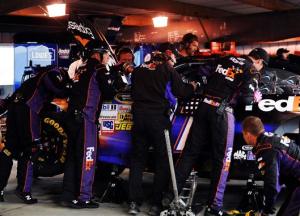 Denny Hamlin: Martinsville is one of Hamlin’s best tracks on the Sprint Cup circuit. Hamlin said, he had to capitalize and get a win this weekend to have a real chance to win the championship. While throughout the race, Hamlin recovered twice from penalties, in the end he missed his golden opportunity and now has next to no chance of earning a title in 2012.

After overcoming two speeding penalties on pit road, Hamlin had little time to overcome a voltage issue that ultimately led him to repairs in the garage and a thirty-third place finish. At the end of the day he came away fifth in the standings and 49 points behind leader Jimmie Johnson. On Sunday, Hamlin’s championship hopes coasted away when his car coasted to a stop on the race track.

Kasey Kahne: Kasey Kahne keeps finishing well with quiet strength. He finished third at Martinsville, after running in the top-ten all day. Kahne’s average Chase finish is 7.14, which is actually better than third-place Clint Bowyer‘s performance.  Kasey Kahne remains a legitimate championship contender as he sits fourth in the Chase standings, just 29 markers behind the points leader. A win would go a long way to enhance Kahne’s title chances, especially if he’s involved in a tie with Clint Bowyer. Of the top-four contenders, Kahne has the fewest wins with just two. He’ll need at least one win – or perhaps two – in the next three races to keep his championship dreams alive.

Clint Bowyer: Running strong all day, Bowyer raced Jimmie Johnson and Jeff Gordon for the lead through out the race. Bowyer led over 150 laps and battled Jeff Gordon on the last lap for a fifth place finish. With an average Chase finish of 8.29, Bowyer leaves Martinsville third in points and still in the championship battle. He sits a mere three points ahead of Kasey Kahne in the point standings. Another win or two, would be the boost he needs to move up the Chase ladder toward a championship title.

Brad Keselowski: Brad Keselowski started 32nd Sunday as everyone watched with anticipation throughout the day. Many wanted to see if the young team could handle the pressure of starting near the rear and finish strong at a track where Keselowski’s race record leaves room for improvement. Brad slowly worked his way into the top-ten with pit strategy and patience through out the day. Keselowski’s hard work paid off with a sixth-place result, giving him a strong Chase average finish of 5.71. Keselowski’s Chase average finish is ahead of Bowyer by 3.18 points and 1.43 points ahead of Kahne’s performance.

Although the #2 Team and Keselowski gave up the points lead, they proved their team is not afraid to deliver results when pressure is applied, which will serve them well in the remainder of Chase competition. Keselowski has a good record at the remaining three tracks and he plans to give, five-time champion, Jimmie Johnson, his toughest competition all the way to the final lap at Homestead. With only two points separating the #2 and #48 teams, Martinsville may prove to be nothing more than a hiccup on Keselowski’s route to his, and Penske’s, first Sprint Cup title.

Jimmie Johnson: Jimmie Johnson came into Martinsville with high hopes and capitalized in every way possible. Johnson started on the pole, led the most laps, got the win and left with the championship points lead. Johnson battled Gordon and Bowyer on Sunday for the lead and came away on top.

With just three races remaining, Johnson’s Chase average finish is just slightly better than Keselowski’s at 5.43 – a slim 0.28 difference.  The #48 team and Johnson currently hold a mere two-point lead over Keselowski and will need to keep up their energy to continue their extraordinary performance for the duration of the Chase. With the experience of winning five championships, Johnson seems to have a leg up on Keselowski, but only time and the results of the next three races will tell if that will help him win his sixth title in 2012.