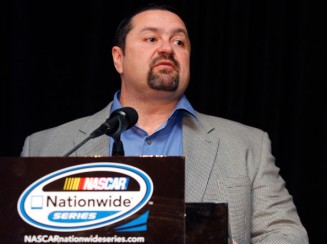 To strengthen and grow its racing series for 2013 and beyond, NASCAR announced  several revisions to its Competition personnel structure. The following changes will take effect in 2013:

Joe Balash, who has served as the NASCAR Nationwide Series director since 2004, will be assuming a new role as International Competition Liason. This position will be the NASCAR point of contact for competition-related matters relative to the NASCAR Toyota (Mexico) Series, the NASCAR Canadian Tire Series, the Euro Racecar, NASCAR Touring Series and other international competitions and series in which NASCAR may be involved and/or considering involvment. Balash now will report to Richard Buck, who has been promoted to managing director, Competition GRAND-AM and managing director, Touring Series NASCAR.

Wayne Auton,  who has served as the NASCAR Camping World Truck Series director since 1995, will assume the role of NASCAR Nationwide Series director. Auton will continue to report to John Darby, managing director, competition and NASCAR Sprint Cup Series director.

With the increasing integration between NASCAR, GRAND-AM, American Le Mans Series (ALMS) and Euro Racecar, NASCAR Touring Series, these moves are designed to strengthen all of the sport’s racing series, both at the national and international levels.

“We recently completed a thorough, strategic review of all of our racing series and believe the changes we’re announcing today will further strengthen our overall racing and offer us the best opportunity for growth,” said Robin Pemberton, NASCAR vice president of competition. “Joe (Balash) is terrific at building relationships with track operators, sponsors and other key stakeholders, and he will be an excellent fit in his new role. I’m also pleased our system allowed us to promote our talent up the ranks, as is the case with Wayne (Auton), Chad (Little) and Brad (Moran). I think this shows that we have a great deal of depth in our series director leadership roles and these moves reflect that depth and versatality.”

George Silbermann, NASCAR vice president regional and touring, highlighted the fact that these moves will aid NASCAR as it continues to focus on expanding its reach beyond the United States.

“Our sport is ever-evolving and we plan to grow in regions of the world where an increasingly strong appetite exists for NASCAR racing,” said Silberman. “Joe (Balash) certainly will help us achieve our international goals which not only include conducting our existing series at a best-in-class level bu also attracting new partners for global exhibitions and/or series.”

The NASCAR Toyota (Mexico) Series continues to attract top young driver talent and for the first time, the series will race on U.S. soil in 2013, when it kicks off its season March 1 at Phoenix International Raceway. The NASCAR Canadian Tire Series presented by Mobil 1 is growing in popularity and the maiden season of Euro Racecar, NASCAR in 2012 exceeded the sport’s expectations.