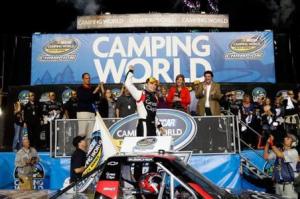 Last season’s Camping World Truck Series champion, James Buescher, will return to the Truck Series to try and defend his title in 2013.

James Buescher and Turner Motorsports made it official that Buescher will be back and primed up for another championship run in 2013. Buescher will still be driving the No.31 with the same sponsors from last season.

Buescher was rumored to be moving up to the Nationwide Series for 2013 with Turner Motorsports but that will not happen this year. However, Buescher will run between five and 15 Nationwide races in this upcoming season. Buescher is the defending winner of the February Daytona race.

Buescher will be competing against familiar faces in the Truck Series in 2013 with many drivers returning to the series. Ty Dillon will have the opportunity to avenge his loss in the championship from 2012 in the upcoming season. Timothy Peters is also returning and he will look to stay ahead of Buescher who got ahead of him at the end of the season in 2012. Buescher will also be competing on two new tracks including MoSport in Canada and Eldora. Two tracks Buescher isn’t known for success.

With Buescher announcing his plans for 2013, his name is crossed off the silly season chart in both the Nationwide and Truck Series’. Buescher will also be looking for his third straight season in the Truck Series where he has finished in the top-three in the standings. All of the Truck Series drivers have to be a bit nervous now hearing that Buescher will be back in 2013 but for the fans, that means more excitement. As Daytona closes in, the final preparations will be made for the Truck Series in 2013 and another great truck racin’ season is right around the corner.