One Nationwide team has announced part of its line-up this year, while leaving more unanswered questions for another NNS team. 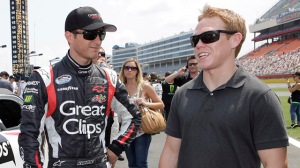 2013 will see another pair of drivers at a new home. Kasey Kahne and Brad Sweet, who shared a Nationwide Series ride in the no. 38 Great Clips car, during the 2012 season for Turner Motorsports, will be with a new NNS team this season at JR Motorsports.

Kahne has a well-documented history with Great Clips as a sponsor including, three Sprint Cup races last year. So, it comes as no surprise that Great Clips is moving with Kahne to his new Nationwide team.

In 2013, Kahne and Sweet will share the no. 5 car out of the JR Motorsports stables, joining Regan Smith, who will be running the no. 7 car full time, and Dale Earnhardt Jr, who will run the no. 88 car for a handful of races this season.

The exact number of races each will run and who will run which event has yet to be announced, although it is rumored that Kahne will run up to 15 races while Sweet runs the remainder of the schedule.

Before this announcement, it seemed likely the Kahne/Sweet duo would remain at Turner, as there had been no indications of any movement before the end of the 2012 season. Now with their departure, it remains to be seen who will be in the no. 38 this season, as well as Turner’s three other cars, the nos. 30, 31, and 32.

Justin Allgaier is rumored to be returning to the 31 as there is currently no indication that he might be leaving TMS for another team. But at the same time, there has been no official announcement about a contract or his return for the 2013 season.

As part of his recent two-year agreement with Turner Motorsports, Jeb Burton is planning to run a partial Nationwide schedule, along with campaigning a full season in the Truck series. Burton has been rumored to be in the no. 32, but there has been no official announcement as to his car number or the number of races he will be running in the Nationwide Series for 2013.

Fans can anticipate more announcements from Turner Motorsports in the coming weeks.